I was really pleased to be asked to give a keynote at the Stirling Symposium on Belgian Refugees in the British Isles in the First World War, which took place on September 2nd 2014. The event was organized by my old friend Jacqueline Jenkinson. Jacqueline has had a long interest in the history of refugees in Britain, and is the author of an excellent book on the topic of the 1919 riots. The Symposium on Belgian Refugees was funded through a larger research grant from the Leverhume, and the proceedings will be prepared as a special issue of ‘Immigrants and Minorities’ called Soon Gone, Long Forgotten – uncovering British responses to Belgian refugees during the First World War.

The title of my paper was ‘Finding the Belgian Refugees in Cymru1914.org’, and the slides are available online. I’ve been asked to prepare a full version of the talk for the proceedings, which I will do sometime in early 2014. However, I wanted to highlight some of the key points from my talk here, as they are issues I want to give a lot more thought to over the coming months.

The starting point of my paper was searching through the the NLW digital Archive, The Welsh Experience of the First World War, cymru1914.org, looking for references to the Belgian Refugees in Wales in the archives, manuscripts and newspapers of 1914-19. This was an opportunity to have a really good hunt for material about Belgian refugees in Wales, their experience, the official response to their presence, and even their own voices. It was an opportunity to combine material from disparate sources and differing formats, and to properly test the archive as a resource for examining a specific historical topic.

The issue of Belgian Refugees in Wales is surrounded by commonly received myths: of a hearty welcome, of refugees who were artists and writers, of a philanthropic response, but there has been little research. From a preliminary examination of the evidence in cymru1914.org I was able to uncover some of the history, and also identify limitations and next steps in working with, and developing digital archives.

The first place I looked was the newspapers. Because they have been through a process of optical character recognition, it’s easy to do fast and accurate keyword searching of the 70,000 newspapers from 1914-19 in the archive. The OCR is generally of a pretty good quality (certainly compared to Google Books and other newspaper archives) but could still be enhanced (and we are investigating crowdsourcing methods to do this to enhance the archive). 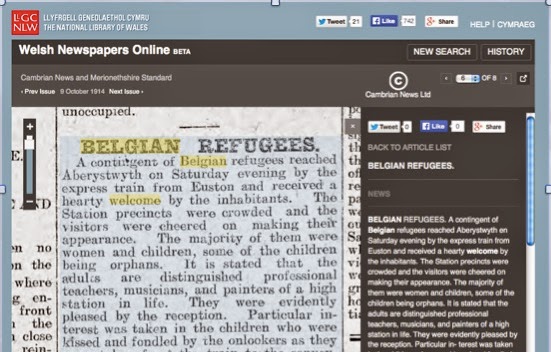 Shortly after the start of the War, there were a lot of accounts of Belgian refugees coming to Wales, and the newspapers support the perception of an initially enthusiastic welcome in rural and urban areas. This account, of the arrival of a small group of refugees to Aberystwyth in 1914, is fairly typical. It was reported on 9th October in the Cambrian News and Merionethshire Standard. 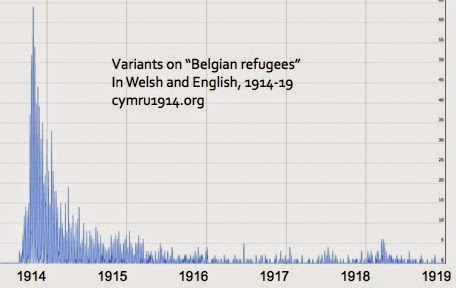 Digitised Newspapers are a great resource, and incredibly convenient for scholars, they present issues of scale – it’s difficult to meaningfully engage with keyword searches of 70,000 pages, let alone the two million that will eventually be in Welsh Newspapers Online.  You can’t search and browse. We’ve been exploring new ways to visualize the newspaper dataset through time and space, using tools based on Google’s NGram.

Using this, it’s possible to find clusters and patterns in the whole corpus of newspaper data, and to track their use over time. Subsequent analysis, which we are working on at the moment, will enable better visulisation of this data in a more spatial and temporal form, enabling better pattern searching in the data. This graph shows the use of the term "Belgian Refugees" in the Welsh Newspapers in Cymru1914.org from 1914-19.

I have to admit that when I showed this graph at the Symposium, there was a gratifying murmur of recognition from those present, who had found almost exactly the same spike in newspaper reports from other parts of the UK during the period. unfortunately, none of them had had the benefit of digitised newspapers to work from doing this work manually represented a significant amount of effort!

There are of course qualifications to using tools like N-Gram: the results are just a snapshot, and any results are only meaningful as the underlying data. But as a starting point for evidence gathering on a large scale, they are helpful.

These tools are no substitute for a close reading of the archives. At the local level, the most obvious record of the impact of Belgian refugees were the records of local Belgian Refugee Committees. Cymru1914.org contains papers in Welsh and English from the library of William David Roberts, Rector of Llanfair, Harlech in North Wales, NLW MS 9982E (and I'm very grateful to my colleague at NLW Rhys Davies, for working through the Welsh with me).

Working through this material the story unfolds of the formation in Llanfair of  “A Committee.. in the parish to help the Belgian refugees…”, and local activity to prepare for them. In December, they arrive: “a party of six Belgian refugees": Joanne Lienknecht 45, her children  Julia Gubel, 21 Charles Gubel, 17 and Caroline Lienknecht (6). There are a number of items relating to the Belgians, and even a charming "thank you" card, dated June 9th 1915: 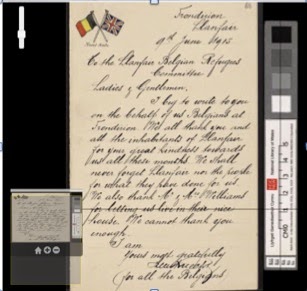 “To the Llanfair Belgian refugees Committee: I beg to write to you on the behalf of us Belgians at Frondirion. We all thank you and all the inhabitants of Llanfair for your great kindness towards us all these months. We shall never forget Llanfair nor the people for what they have done for us". – signed “From Lienknecht for all the Belgians”.

However, subsequent reading shows that  the refugees became more of a burden on the local community as the war continued. Roberts’ collection gathers many official demands on the agricultural produce of the area, especially the urgent need for “farm produce for his Majesty’s forces”. The war effort squeezed the local community, and subsequent returns issued from the parish, included in the archive, show that there wasn’t a great deal of produce to spare.

By April 13th 1916, the local Committee funds were exhausted. Correspondence with the War Refugees Committee about their support ultimately leads to arrangements for the six Belgians to leave Llanfair on the Cambrian Railway, on May 4th, 1916.

The story of the Belgians of Llanfair is an example of the value of  two kinds of digital engagement: macro analysis and pattern matching within large text archives like newspapers, and close reading of archives for detailed analysis of individual records. The impact that six Belgians had on an agricultural Welsh-speaking community in North Wales is a way to understand the 'spike' and tailing off, of interest in Belgian refugees in the seen in the N-gram: of initial interest that fades as the War does not end quickly, and the refugees become a burden on a population dealing with shortages and other stresses of a long conflict that affected all sections of society. An initial enthusiasm soon was replaced by indifference and a realisation that there was a long-term cost to hosting refugees.

But this process of discovery also highlights the drawbacks of digital archives. The story of Charles Wens and his five Belgian compatriots becomes invisible as soon as he leaves Llanfair on the Cambrian line to London on May 4th 1916. The data in Cymru1914.org is currently a digital silo – while open, and freely accessible, it is not currently linked to related archives from elsewhere. Ideally, we want to connect this data with other official archives and records from elsewhere, and develop new ways of tracking digital identities of historical figures.

Nonetheless, this piece of research has been an interesting opportunity to test the effectiveness of Cymru1914.og for testing First World War myths against reality, integrating sources from disparate collections, working with materials in variety of formats, and therefore giving a voice to those on the margins of the past.